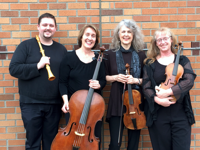 January 23 at 8:00pm in the Battelle Auditorium

Curtis Foster, Baroque oboe and recorder, has appeared as soloist and member of many outstanding groups, including the Seattle and Pacific Baroque Orchestras, Pacific MusicWorks, American Bach Soloists, Musica Angelica, Mercury Baroque, Bach Society Houston, the Newberry Consort, Victoria Baroque Players, Indianapolis Baroque Orchestra, Chicago Opera Theater, and Baroque Band. Festival Performances include the Vancouver, Chicago, and Bloomington Early Music Festivals, Ottawa International Chamber Music Festival, and the Oregon and Phoenix Bach Festivals. Curtis has performed with small ensembles in concert from San Francisco to Dubai, including appearances with Byron Schenkman and Friends, Seattle Baroque, MusicSources (Berkeley), SacroProfano, as well as his own Seattle-based group, sound | counterpoint. Mr. Foster is also a passionate advocate for music of our own time, and has commissioned and premiered many works by contemporary composers for old instruments.Mr. Foster has recorded for ATMA Classique, Cedille Records, and IU Press. He is a graduate of Indiana University's Early Music Institute.

Laurel Wells is known for her work on both baroque and modern viola and violin. She has enjoyed an extensive and eclectic musical life, performing in Hong Kong, Norway, Canada, and throughout the United States. For twenty years she played violin with the Lyric Opera of Chicago, between seasons earning Master’s degrees in violin and viola from Indiana University. She studied chamber music at the Banff Centre in Canada and performed extensively under the guidance of the Vermeer Quartet. Laurel was a member of the Northwest Chamber Orchestra, holding the position of principal viola. She is currently a member of the Pacific Northwest Ballet orchestra and performs often with the Seattle Symphony, Seattle Opera, and at the 5th Avenue Theater. In the early music world, Laurel plays with the Seattle Baroque Orchestra, the Pacific MusicWorks, and with her quartet, Opus 20, in the Gallery Concert Series. She has also participated in the Whidbey Island Music Festival, and the EMG's Early Music Fridays. Laurel has recorded with Seattle Baroque, for NPR, and the Wild Boar and Centaur labels.

Cellist Meg Brennand enjoys an eclectic musical life in Seattle. She has been cellist with the critically-acclaimed Onyx Chamber Players since 2001, at Town Hall Seattle and now ensemble-in-residence at First Church Seattle and with whom she has performed throughout the Northwest and on KING-FM. She is also cellist with the Pacific Northwest Ballet Orchestra in Seattle, and she will be part of the second NYC tour in February 2016. Meg serves on the cello faculty at Seattle Pacific University, and she maintains an active cello studio, where she teaches privately and coaches chamber music ensembles. As a member of the period-instrument community in Seattle, Meg performs on baroque cello with the Seattle Baroque Orchestra and Pacific Music Works.She has performed as solo cellist and with small ensembles on Gallery Concerts Series and with the Cosi Quartet. Past seasons have included performances with the Portland Baroque Orchestra and Pacific Baroque Orchestra in Vancouver, BC. Meg is a graduate of the Eastman School of Music.