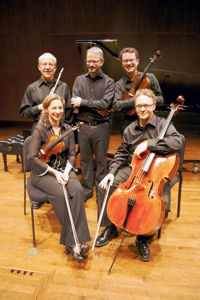 Byron Schenkman has recorded more than thirty CDs of 17th- and 18th-century repertoire, including recordings on historical instruments from the National Music Museum and the Museum of Fine Arts, Boston. He received the Erwin Bodky Award from the Cambridge Society for Early Music "for outstanding achievement in the field of early music." Schenkman made his New York recital debut on modern piano in 2009 and his playing was described in The New York Times as "sparkling," "elegant," and "insightful." He is a member of the new period instrument ensemble Gut Reaction and has been a featured guest with the Chameleon Arts Ensemble of Boston, the Daedalus Quartet, the Northwest Sinfonietta, Pacific Baroque Orchestra, Philharmonia Northwest, and the Portland Baroque Orchestra. He also appears frequently in recital with violinist Ingrid Matthews, with whom he co-founded the Seattle Baroque Orchestra in 1994. Schenkman is a graduate of the New England Conservatory and received his master's degree with honors in performance from the Indiana University School of Music. He currently teaches at Seattle University and Cornish College of the Arts. In 2012 he also served as guest lecturer in harpsichord and fortepiano at the Indiana University Jacobs School of Music.

Flutist Paul Taub is Professor of Music at Cornish College of the Arts and a founding member of the Seattle Chamber Players. He has performed and recorded American and world premieres by internationally known composers including Robert Aitken, John Cage, George Crumb, Janice Giteck, Sofia Gubaidulina, Wayne Horvitz, Ned Rorem, Toru Takemitsu, Reza Vali, and Peteris Vasks, among others. As a soloist, he has appeared with the Northwest Chamber Orchestra, the Olympia Chamber Orchestra, Philharmonia Northwest, the Everett Symphony, the Young Composers Collective, and the Esoterics. Taub has been featured on National Public Radio’s Performance Today, at the Goodwill Arts Festival, in a solo recital at the Leningrad Musical Spring International Festival and at New York’s Symphony Space. He has also performed four times in Russia with the Seattle Chamber Players and twice at the Warsaw Autumn Festival in Poland, as well as in China, Costa Rica, Denmark, Estonia, Italy, Latvia, Lithuania, The Netherlands and Ukraine. Taub’s program of international solo flute music has been presented at numerous festivals and universities throughout the U.S., Canada, and France. H first CD, Oo-Ee (Periplum), features ten solo commissioned works. In 2011, he released Edge – Flute Music from the Periphery of Europe (Present Sounds) featuring works by Kancheli, Vasks, Sergei Slonimsky, Artur Avanesov and Elmir Mirzoev.

Violinist Liza Zurlinden, a native of San Francisco, enjoys a career rich with chamber music, orchestral playing and teaching. She is a recent transplant to Seattle, and is thrilled to be making this beautiful city her home! Ms. Zurlinden has performed with the New Century Chamber Orchestra in San Francisco since 2003, and the self-conducted chamber orchestra A Far Cry in Boston since 2007. She has collaborated with members of the Cleveland, Juilliard and Mendelssohn Quartets and was a member of the Mosaic Quartet in New York from 2008-2010. Ms. Zurlinden maintains a private teaching studio and has also coached chamber music in Rice University’s pre-college music program, at the University of Memphis, at the New York Summer Music Festival, and through the New York Youth Symphony and Boston Youth Symphony Orchestra chamber music programs. She was assistant professor of violin and a member of the Ceruti String Quartet at the University of Memphis for the year 2002-2003. She has recorded for Naxos, Paladino Music, Azica, NSS and Blue Note Records. Ms. Zurlinden holds a Bachelor of Music degree from the University of Michigan, a Master of Music degree from Rice University and an Artist Diploma from SUNY Purchase.

Violist Jason Fisher, native of Seattle, is a founding member of the critically acclaimed, co-directed chamber orchestra A Far Cry. He is also a member of the newly founded bi-coastal baroque ensemble, Gut Reaction. Jason has been described as bringing “an intelligent, impassioned delivery and innate understanding of the conversational nature of chamber music” (The Springfield Republican), and his playing was portrayed as “delightfully rich” (The Times Argus). Fisher has performed with members of the Florestan and Peabody Trios, and the Brentano, Cleveland, Emerson, Mendelssohn, and St. Lawrence String Quartets. In an appearance with the Peabody Trio, he was hailed as a “fine guest artist”, his performance described as “first-rate” (The Baltimore Sun). He was both a Carnegie Hall Fellow, taking him on a tour of concerts, outreach, and cultural exchange in Kazakhstan and the Kyrgyz Republic, as well as a Peabody Singapore Fellow, spending a month in Southeast Asia assisting with inaugural ceremonies for the new Yong Siew Toh Conservatory and performing as guest with the Singapore Symphony Orchestra. Jason Fisher and his wife, violinist Asuka Usui, live in the Jamaica Plain neighborhood of Boston. He plays on an 18th-century English viola by Richard Duke made in London, 1768.

Nathan Whittaker, violoncello, enjoys a unique and diverse career as a concert soloist, chamber musician, recitalist, teacher, and historical cello specialist. He plays regularly with the Seattle Baroque Orchestra, Pacific Baroque Orchestra, Portland Baroque Orchestra, and is a founding member of the Op. 20 String Quartet. His 2012-2013 concert season included appearances at the Indianapolis Early Music Festival, Vancouver Early Music Festival, and Pacific Baroque Festival (Victoria, B.C.), as well as other concert stops ranging from Seattle to New York to Dubai. He also composed and recorded an original score for the Emmy nominated documentary "When Seattle Invented the Future". He can be heard on recordings by ATMA Musique and Harmonia and broadcasts by NPR, CBC, and KING FM. An active pedagogue, he maintains a dynamic private studio and is faculty at the Academy of Music Northwest and Cornish College of the Arts. Along with his busy performance and teaching schedule, he completed a Doctorate of Musical Arts from the University of Washington in 2012. Dr. Whitaker also holds degrees from the Indiana University Jacobs School of Music.