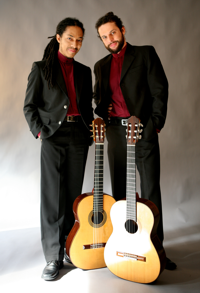 **dedicated to the Brasil Guitar Duo

This program is supported, in part, by a grant from the Washington State Arts Commission and the National Endowment for the Arts.

The Brasil Guitar Duo, winner of the 2006 Concert Artists Guild International Competition, and hailed by Classical Guitar magazine for its "maturity of musicianship and technical virtuosity," is equally at home on a classical or a world-music series. Its innovative programming features a seamless blend of traditional and Brazilian works, resulting in a global touring schedule and a growing catalogue of critically acclaimed recordings.

Duo members Joăo Luiz and Douglas Lora met in Săo Paulo as teenage guitar students and have been performing together for more than fifteen years. The Duo's primary studies were with Henrique Pinto along with Fabio Zanon, Paulo Martelli, Sergio Abreu, and Alice Artz. Douglas Lora earned his Master's degree at the University of Miami, and Joăo Luiz at New York’s Mannes College the New School for Music. Luiz is head of the guitar department at the State University of New York-Purchase, and also teaches guitar at New Jersey City University.

An eager advocate for both traditional and new concerti for two guitars and orchestra, the Duo premiered a Concerto for Two Guitars and Orchestra by Brazilian composer Paulo Bellinati in 2012 with the Săo Paulo Symphony Orchestra under Giancarlo Guerrero. Recent engagements include concerts with the Dallas and Houston symphony orchestras, Ohio's Dayton Philharmonic and Lancaster Symphony Orchestra, and the Philharmonic Orchestra of the Americas.

Brasil Guitar Duo strives to expand the repertoire for two guitars, with Lora contributing works of his own and Luiz arranging both classical and Brazilian music. The Duo performs a broad repertoire of classical guitar duos (Bach, Sor, Scarlatti, Debussy, etc.) combined with the traditional music of its native land (choro, samba, maxixe, and baiăo).

The Duo's first CD, in 2007, was Bom Partido, a CAG Records release featuring all Brazilian repertoire. Two critically acclaimed Naxos CDs, released in 2008 and 2009, contain the complete works for two guitars by Mario Castelnuovo-Tedesco. Its latest CD, on the Avie label, is a collaboration with flutist Marina Piccinini that features all of J.S. Bach's sonatas for flute and harpsichord, as arranged by the Duo for flute and two guitars.